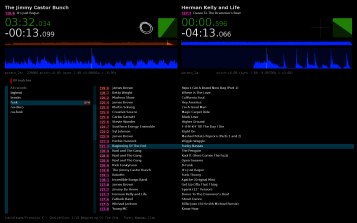 It's designed for both beat mixing and scratch mixing. Needle drops, pitch changes, scratching, spinbacks and rewinds are all supported, and feel just like the audio is pressed onto the vinyl itself.

The focus is on an accurate vinyl feel which is efficient, stable and fast.

A new release, version 1.8 gathers together a few smaller changes and fixes that have been available in development versions for some time, and is a recommended upgrade. See the CHANGES file and commit messages for details.

A little 1.7 release adds locale support for international track and artist names, as well as some minor fixes.

A nice writeup of the PiDeck project is in print this month! The latest issue of the MagPi magazine explains how to get xwax up and running on a Raspberry Pi.

64 Studio has anounced its PiDeck project; an open source project to retro-fit the Raspberry Pi and xwax onto any DJ turntable. There's a couple of awesome demo videos and it's even been picked up by DJworx and CDM. Excellent work by Daniel, Chris and everyone involved.

Rather a late announcement (on the website at least!) of the 1.6 release. For the adventurous, there's a new tool to make your own timecode signal.

For earlier announcements, see the archive.