Despite the fact some commercial systems are tied to their own audio harware, ever since the original Final Scratch these have been just normal soundcards and the work is done in software. As such, one of the strengths of xwax is that it can work with any soundcard available on Linux.

This was the original test setup for xwax and is a good way to get started using a single basic audio interface (eg. Soundblaster Live): 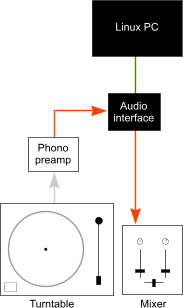 You can buy phono preamplifiers from various sources or perhaps use an old (second) mixer as one. Only a basic preamplifier is required — audiophile quality is not necessary. If you are feeling adventurous and familiar with electronics, you should be able achieve success using an even more basic preamp which doesn't have RIAA equalisation. Let me know if you've tried this.

Because you only have a single deck, you'll have to combine this with another audio device (eg. a CDJ) to do any mixing. This is why it's beneficial to have two decks.

xwax can be used with multiple decks, as long as you have the audio interfaces. Here's an example two deck setup: 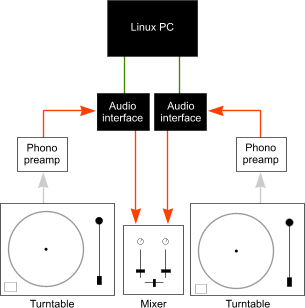 With xwax, you can mix and match different soundcards, even if you are attaching the timecode control of one soundcard to the output of another — xwax does not need any kind of world clock synchronisation.

There any a few USB/firewire audio interfaces available which are designed for this kind of setup. They combine multiple audio interfaces along with the phono preamplifiers in a single unit, and are much more portable. They often have a passthrough to allow traditional vinyl to be played at the flick of a switch.